The dish most commonly associated with Norway is lutefisk, which has become the symbol of Norwegian cuisine and made the term “Norwegian cuisine” an oxymoron. Even those who can’t name the capital of Norway know about lutefisk, probably through the popular American radio show “Prarie Home Companion.” The show’s host, Garrison Keillor, wrote this ode to lutefisk:

Every Advent we entered the purgatory of lutefisk, a repulsive gelatinous fishlike dish that tasted of soap and gave off an odor that would gag a goat. We did this in honor of Norwegian ancestors, much as if survivors of a famine might celebrate their deliverance by feasting on elm bark.

Shocking as it may sound, good traditional Norwegian food does exist. The best, without a doubt, is Pinnekjøtt. It’s made from salted and dried lamb in a process not too different from salted and dried cod which I wrote about before. You can use any boney and fatty cuts of lamb: ribs, rack, shoulder, etc., salt it heavily first and leave it hanging to dry. Sometimes it’s cold smoked to add flavor. In the old days, just like salting fish, pinnekjøtt is a way to preserve lamb for those who cannot afford fresh meat. The traditional cut, the ribs, were the cheapest part of the sheep. 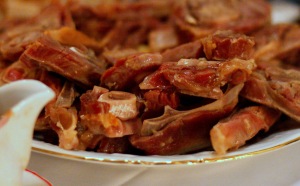 Preparing it for a meal is simple. Like salt cod, the meat is soaked in water for 24 hours (the water must be changed at least once). Then, it’s stacked like a match-box house in a big pot to steam, which cooks the meat and extract more salt. To finish, it’s broiled in the oven. That’s it. No other ingredients — just lamb and salt.

The taste is explosive and addictive. Lamb is already a strong flavored meat. The meat close to fat and fat itself are the most flavorful parts of lamb. Saturating it with salt and desalting magnifies the flavor many times over in the same process that transforms a bland fish, cod, into an intensely flavorful dish like baccalau.

Pinnekjøtt is a Christmas dish, which is probably a good thing. The smell of cooking this stuff lingers in the house for days. If you make it all year around, your house would smell like a sheep farm.